T Junctions are junctions where one a road comes to an end, and drivers have to emerge onto a new road. T junctions get their name from their shape, the letter T. Normally the traffic going along the road at the top of the “T” would have priority.

If you are approaching a T junction to emerge, you should give way to traffic on the new road. It may not always be necessary to stop, but it will depend on the amount of traffic on the new road, and your view on approach. Make sure you practice the MSPSL (Mirrors Signal Position Speed Look) routine on approach to the junction, and do not emerge unless it is safe to do so.

You may need to “peep and creep”to get a better view if the junction is closed and you have a limited view. This is where you use your clutch to edge out, while you lean forward and check whether it is safe to go.

Sometimes three roads come together at the same time. Drivers on the two side roads must give way to the major road they are entering. If the major road is clear but there are cars emerging from both sides of the crossroads, some form of priority must be observed.

If you are approaching a crossroads on the major road, you may see a sign like the one below. 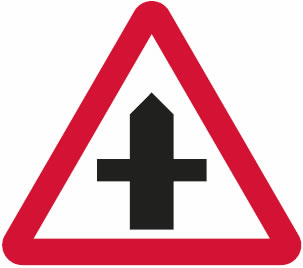 You should use the MSPSL (Mirrors Signal Position Speed Look) routine once you have identified the crossroads. If you are on the main road you would have priority over anyone emerging from the side roads. Watch out for people emerging in front of you,they may have been waiting for a while and might decide now is the time to emerge.

If you are turning left or right approach in the same way you would to turn at a T junction. There may be more traffic around so look out for people turning and emerging in front of you.

When turning right at a crossroads be aware of other drivers coming in the opposite direction, which may be also turning right into the road on your left. You may need to take up your position later, depending on the layout of the road. Look at the other driver’s position, and make you choice carefully.

Where To Position at Crossroads

There are two choices when it comes to positioning. You can either position nearside to nearside, or offside to offside. The nearside is the side of the car nearest the kerb. The offside is the driver’s side.

The advantage of this method is that both drivers can see oncoming traffic. When it is busy make sure you leave a space in traffic queues for other to turn right in front of you. The position of the crossroads may make it more suitable to use this method, but you should asses the crossroads on approach.

This method of turning right at a crossroads is the least safe of the two. The view of oncoming traffic is restricted by the vehicle waiting in front of you, especially if this is a large vehicle like a truck. Motorcyclists and cyclists would be particularly at risk as they would be hard to see behind any type of vehicle. 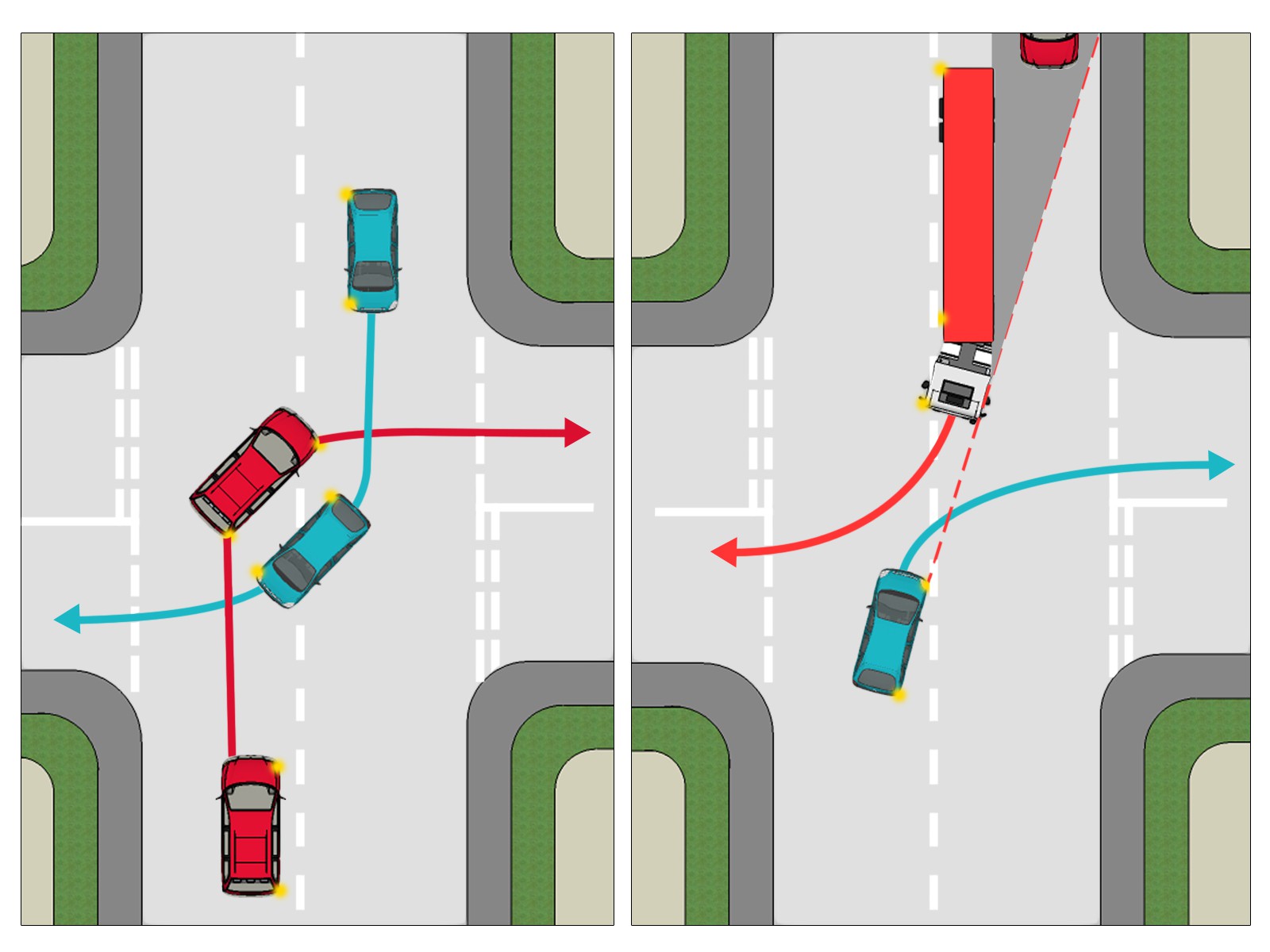 How To Decide Which Position To Take Up

Try making eye contact with the driver of the vehicle in front of you as you approach the crossroads to help you decide which is the best position to take up. There may be road markings that determine where you should be positioning.

Slow down to a speed where you would be able to stop should the driver decide to turn in front of you.

If you are emerging at the crossroads, approach using the MSPSL (Mirrors Signal Position Speed Look) routine, in the same way you would if you were emerging at a T junction. If the road opposite is clear, then treat the road like a T junction with regards to priority and giving way to the new road.

Position When Emerging At Crossroads

If you are emerging left or going ahead at the crossroad you would normally need to position in the left hand lane or normal driving position if there is only one lane.

Priority When Emerging At Crossroads

If you are emerging at a crossroads you need to give way to traffic that is already on the major road, in the same way you would if emerging at a regular T junction.If you were emerging left or going ahead at a crossroads you would have priority over anyone opposite that is emerging right (your left). This does not necessarily mean that they will give way to you, so keep an eye on the other drivers to make sure they do not cut across your path.

If you hesitate they may just set off instead of waiting for you. There is a fine line between caution, and hesitation.

If you intend to emerge right at the crossroads, give way to anyone opposite that is emerging left (their left) or going straight ahead. Do not cut across their path, but be aware they may wait for you to emerge out of courtesy.

If you are emerging right, and the driver opposite is emerging right, then neither driver has priority. Try and make eye contact with the other driver to establish who should go first. Look at the position of the road and their position, you may both be able to emerge together, nearside to nearside.

This is an advances technique and should only be practiced once you are completely comfortable with emerging at crossroads.

Treat unmarked crossroads with caution as none of the roads has priority. Approach them in the same way as you would if you were emerging at a crossroads. Be extra careful if your view is restricted, and remember that the driver coming from your left or right may assume they have priority. Continue only when you know it is safe to do so.

Turning From A Major Road Into A Side Road You …

﻿ Using Mirrors While Driving You should check the mirrors …

Our website is made possible by displaying online advertisements to our visitors. Please consider supporting us by disabling your ad blocker.