The headlights on a car can be turned on using the headlight switch. This is often situated on the same stick as the indicators, but not always. Some cars have three settings for the headlights, they are as follows.

Side Lights: use the sidelights in well-lit areas at night, and during the day when it is a little dull.

Dipped Beam: use the dipped beam headlights from sunset to sunrise in all areas other than well-lit build up areas. These areas will normally have a speed limit of 30mph. Also use the headlights if your visibility is seriously reduced. (i.e. fog, snow, heavy rain)

Main Beam: use the main beam when you are on an unlit road at night. A lot of country roads in the UK may not have street lights. Make sure you turn off your main beam if there is someone coming towards you. You do not want to dazzle an oncoming vehicle.

The hazard warning light switch is normally situated on the dashboard of the car. It may also be just above the steering wheel, near the speedometer.

You should use the hazard warning lights if you are causing a blockage in the road. For instance, if you were to break down somewhere and couldn’t get the car back to the side of the road. 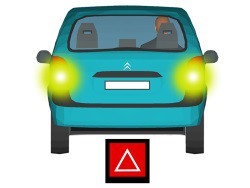 You could also use the hazard warning light to let people know there is a hazard ahead on a motorway or dual carriageway.

An example could be if you were approaching a large queue on a motorway, and wanted to warn the traffic behind you of the danger. Only do this for long enough to let the following traffic see your signal.

The hazard warning lights should never be used as an excuse to park illegally.

The majority of cars will have three speeds on their front window windscreen wiper switch. These can be seen below.

Intermittent: this setting is just for light rain and snow. It will wipe the windscreen every few seconds. This is sometimes variable and can be set to the time setting you require.

Normal speed: use the normal speed in constant rain or snow. If the wiper blades begin to rub, consider changing the speed to intermittent.

Fast speed: you will only need to use the fast speed setting in very heavy rain, as it sweeps the windscreen very quickly. I find this setting off putting, and refer not to use it unless I really have to.

Rear Wiper: most cars will have a rear window wiper. The rear wiper may only have one speed, and is turned on via a control on the same stick as the front window wiper.

If you have your front wipers on, your rear wiper would come on should you select reverse gear. This will help you see more clearly out of the back window, which is where you should mostly be looking when reversing.

Window Washer: The wiper control will also be used to clean the windows using the windscreen washer. In my car you would pull the stick towards you to clean the front window, and push it away from you to clean the rear window. This is likely to be the same in other cars, but may be slightly different.

The Accelerator The accelerator is the pedal on the right …

The Hand Brake (Parking Brake) The handbrake, also known as …

Our website is made possible by displaying online advertisements to our visitors. Please consider supporting us by disabling your ad blocker.